Home   Uncategorized   Thriving in the Desert

Thriving in the Desert

Some days are just hard. I mean really hard like trying to climb Mount Everest in a pair of worn-out flip-flops. This past week, I had a string of stressful days right in a row. Yep, the disappointments just kept-a-comin’. I was at a national conference, trying to manage what might’ve been the normal difficulties of being away from the convenience of home, but as each day passed, my purpose for even being there became fuzzier and fuzzier. My plans seemed to be blocked in every direction, leaving me simply exhausted.

I don’t know how it is for most people, but when I’m fatigued and overwhelmed, it’s easy for me to revert to my default of wanting to be left alone. But how do you isolate with hundreds of anxious people buzzing around, desiring to make small talk about everything and actually, nothing? After all, most of us were there to pitch our brilliant and novel, never-thought-of-before research ideas. Networking was imperative.

Sometimes when the “one big thing” doesn’t go right, the “many small things” seem to also go wrong. Like, the cold conference rooms that make you want to wear wool underwear in the heat of summer. Why would anybody pay money to be tucked into an icebox all day? Not like I’d agreed to be a participant in a cryogenics experiment—how do live humans behave when exposed to below freezing temperatures for six hours? On top of that, I sat next to someone for two days, talking and interacting for a cumulative 12 hours. On day three, in a different setting, the person extended their hand and said, “I’m so-n-so. I don’t believe we’ve met before.”  Ouch! Was I invisible? I think I clearly remembered the person. But maybe not…

Frost-bite is related to hallucinations.

Today, I’ve decided to reframe my thinking about everything that happened at the conference, and I’m reflecting on the junipers I saw when my family was vacationing in warm Utah a few weeks ago. The juniper in the picture, with its gnarled and twisted trunk, looks like it’s been weathered and beaten so badly, I honestly thought it was dead. 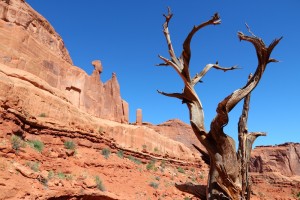 But it wasn’t … And neither is my research idea.

So what if my concept has been initially shot down? I’m not giving up on what I believe is a viable theory. Perhaps with a little nurturing, my seed will produce a harvest. The land may deceptively appear dry and desert-like as if nothing could grow there, but the juniper thrives in the desert. The Utah juniper is indomitable, steadfast, unyielding… and through Christ, so am I.

What are you doing to overcome obstacles to your plans, dreams, or ideas?

Receive email updates when the site is updated!